Vowels are divided based on phonemic knowledge, in short, it is divided based on the perceived knowledge of Short Vowels, Long Vowels, triphthongs, consonants, and diphthongs. If we possess a thorough knowledge of these, then we can achieve optimum accuracy in distinguishing syllables. In syllables, it shows obviously where the stress is and many syllables the word has, and finally how to pronounce correctly the word.

Although there are some contradictions in the syllable which should always be kept in mind, for example, the word “university”, in this word there are 4 vowel sounds because here U is a vowel letter, not a vowel sound. By studying Phonology, one can get thorough command over spotting vowel sound words. 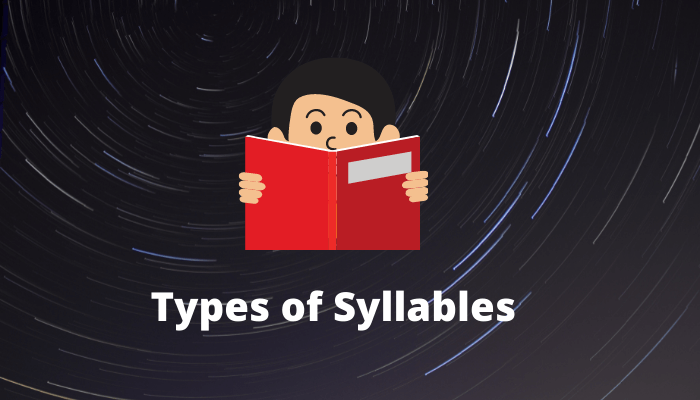 A syllable is the part of a word that has the most stress put on it. For example, if we talk about the word “symphony”, it is basically pronounced as SIM-foe-knee, “banana” is pronounced buh-NA-na and “café” is pronounced kah-FAY. Monosyllabic words (words with only one syllable, i.e. only one vowel sound) such as “car” (KAR), “horse” (HORS), and “phlegm” (FLEM); rather logically; are not affected by this linguistic phenomenon.

In other words, syllable count basically depends upon conversational dialect, but in most cases, in typical speech, it has either 3 syllables or 4. In everyday speech, it mainly has 3 syllables: “tem-pra-cher” or /ˈtɛmpɹətʃəɹ/. In this article, we will be going to talk about six important types of syllables in precision.

In general, such closed syllable words contain one vowel followed by one or more consonants. However, there can be words that have one vowel followed by a consonant that is NOT SHORT VOWELS (ex. syllables ending with h,r,y,w – they are NOT Closed Syllable words). One must keep in mind that a consonant can be a part of a syllable. In this sense, a prenasalized consonant can be a part of a closed syllable depending on the syllable structure. You must pay attention to what you have to do with your mouth to pronounce each. Even though they are both a single syllable, “yeah” is distinctly easier to pronounce from a strictly mechanical viewpoint. In short, closed syllables are those words that are followed by one or more one consonants.

An open syllable has only a consonant and a vowel. In the word “pupil” the first syllable is open and the second syllable is closed: pu-pil. An open syllable is a syllable not closed by a final consonant (or more). So, if a vowel is at the end of a word, that syllable is open. If a vowel has a consonant after it, followed by another vowel, the consonant belongs to the following syllable, so the syllable before it is open. If there are two consonants between two vowels, the second one belongs to the syllable after, but the first consonant generally closes the syllable before it, unless the two consonants form a cluster so they can both be part of the following syllable, leaving the prior syllable open; and languages can have different rules about which clusters are allowed to do this.

A diphthong is a ligature of two letters. In the articulation of diphthong, the tongue moves from one position to another, causing a continual change in vowel quality, as in the pronunciation of an in English ’late’. A digraph or ligature represents a composite vowel, such as this, ou in mouth, or ae in Caesar. The Bank of the English language is replete with diphthongs. Its first known use is found in the fifteenth century in the English language. It came from late Latin diphthongs, from Greek diphthongs, from di + phthong . Di stands for two and phthong suggests sound. Diphthongs are also referred to as gliding vowels because of their double tone or double sound.

This type of syllable is very easy to comprehend. R-controlled Syllables can be easily be distinguished because these syllables have at least one vowel which is followed by “r”. Some of the prior examples in which one can notice r-controlled syllables are her, bird, fur, ear, and for. Before studying this syllable, you must go through open, closed, and Vowel-consonant-e syllables. The r will change the way the vowel is pronounced, like in the word car. Some examples of r-controlled syllables are hor-net, bom-bard, far-mer, tar-nish, mor-sel, bor-der. This syllable must be considered in practice vehicle studying first and second grade.

There may be 2 or 3 vowels together, but they only make one sound: boat, bread, sleigh, oi! This is the absolute description of types of syllables with examples. One must keep in mind that when a participle is used as an adjective, it is usually pronounced with two syllables. “The bless-ed holy Virgin.” As a verb or part of a verb, it is one syllable. “He blessed me.” As a predicate adjective is one syllable.

“I am blessed.” As a curse, it is two syllables. “This bless-ed thing just won’t work!”. Furthermore, single-syllable words can be heard as two syllables but they consist of a single syllable, in all English language dialects “it” is always pronounced just as it looks, a single syllable rhyming with “bit” and “sit”. In conclusion, we can infer that a syllable is a word or part of a word with ONE VOWEL SOUND.