A syllable has the capacity to influence the rhythm of the language, its poetic meter and its stress patterns. A word come into existence when the consonants and vowels join together. Take the example of a syllable, “Long”, it has only one syllable as it has only one sound, next is “Silent”, this has two syllables as it has two sounds. Therefore, likewise we differentiate between one and two sounds in syllables. 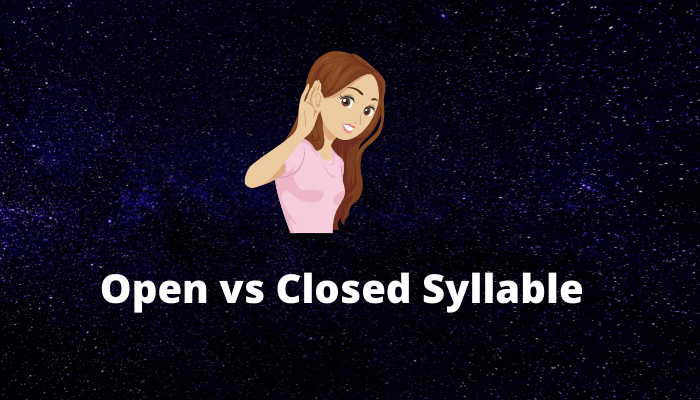 We will take the example of open syllables: –

Here we saw a little more specifically on long vowel sounds and their use and while pronouncing which particular sound is been heard.

Difference between Open and Closed syllables

With different ways of sound, end and others how the two are different from one another.

We can take here certain examples of syllable division: –

So here on a little we got to know the divisions in syllables. when we learnt how to divide words between with one of them having middle consonant. This can leave the first syllable open which often has a vowel sound present in it as for example are :-

as one can see from the example itself that how the syllables are separated. As on the move forward we can see some more examples on open and closed syllables.

Here in the tables again we saw the division in words of open and closed syllables. To scratch your head around one syllable word, target considering the word with long one syllable and ends with a vowel sound, that brings you to the open syllable area. Either one can also look to the single vowel at the end of the word, or in other words that the word ends in a long vowel sound.

In the closed ones the sounds are very short of the vowels as already the word ends with a consonant, the word does not sound similar to the name of the letter.to learn about the open and the closed as they are the very easy way to get oneself understood with the basics of syllables. It is the foundation of one to start reading. As when one attains the complete knowledge of syllables than one attains great knowledge for how to read properly with stress on words.

On a very interesting note, it needs to be shared that there are majorly two factors that influence the pronunciation of a word and that is an open and a closed syllable. These two features majorly affect the pronunciation of words as that is been decide whether a word is ending with a vowel or a consonant.

If one knows the perfection as to where to give the stress in the word during pronunciation that gives a correct technique to speak. Also, with this one can also very well get to know whether the word is an open or closed syllable.