Do you know that decoding strategies basically rely on dividing different words into simple syllables?

The only thing that you need to learn when it comes to dividing words is a simple rule known as the Syllable Division Rule. Once you understand the rules, you would be able to solve several things such as:-

One of the easiest way is to use Syllable counter tool. 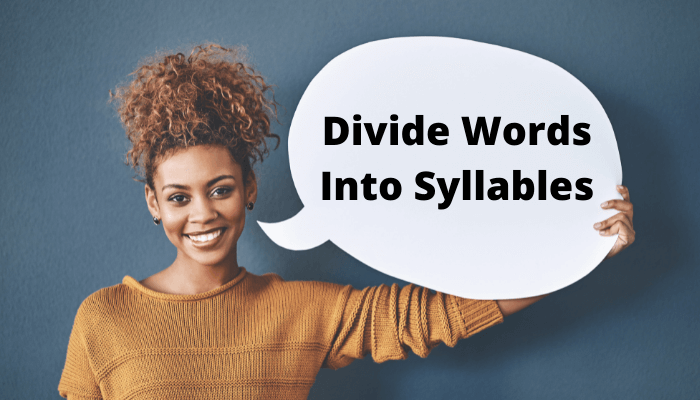 There are 6 different types of syllables that exist in the English language. These are based on the sounds being produced while uttering these vowels. They are as follows:-

You can read more about types of syllables here.

The most important thing that you need to learn is the fact that you should know how to divide different words into different syllables. The number of syllables is decided on the vowel sounds that they emit. For example, the word ‘amazing’ has three vowel sounds, namely the long ‘a’ at the start, the short ‘a’ at the middle and the mid ‘i’ at the end.

But, did you notice I said the word ‘vowel sounds’ and not vowels? This is because of the fact that it actually relies on sounds and not vowels. Like the word ‘cupcake’, it has a short ‘u’ at the beginning and an empty ‘a’ at the end. Although it has three distinct vowels, they are still two-syllabled.

There are some division patterns that you need to understand, which is one of the most crucial rules in the Syllable Division Rule. These rules are simple and yet it is a bit difficult to understand at the start. They are as follows:-

Eg:- Sunset – This word has a short ‘u’ and short ‘e’. And the two consonants that are exactly in the middle get cut off and we say the word ‘sun-set’.

This is another case where you must slice the words into two different syllables. This is where the V/CV rules come in. You need to slice the sound between a vowel and a consonant which is followed by another vowel.

Eg:- Robot – This word has a consonant ‘T’ in between two vowels ‘o’s. This means that the word would split just after the first vowel, i.e. ‘Ro-bot’.

This rule is awarded as the most difficult rule to understand in the Syllable Division Rule. Make sure that you follow the rule correctly to understand.

It works when we create an open first syllable that should NOT be opened, (aka the rule is that it should not have a long vowel sound), then we switch positions to revert back to the VC/V pattern.

Eg:- Comet – Consider this word. You don’t pronounce it as Co-met, do you? It is definitely a ‘comet’ in one go which has a small ‘o’ in the same. This is where we created the V/CV division but we followed the VC/V version for sound.

This is the last rule of the Syllable Division Rule. If you find a word that has two vowels that don’t go together with each other, you divide it slightly between the two but joining the sounds as well.

Eg:- DIET – ‘Diet’ has two vowels that do not go together in between. So the division would be a swift ‘die’ and ‘yat’.